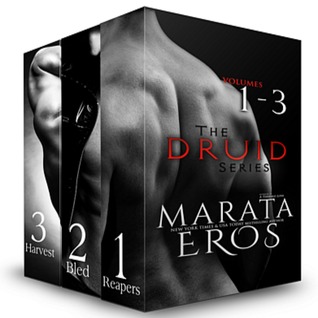 WARNING: THIS IS NOT A BOOK FOR CHILDREN OR EVEN YOUNG ADULTS. IF YOU ARE 18 OR YOUNGER, STOP READING THIS REVIEW RIGHT NOW!

The vampires are a dying race, their females sterile. When it’s discovered that human females of Druid ancestry can be viable breeders…the harvest begins. Rachel Collins is a young woman living in the frozen north of Alaska in a dead-end job with a circular life. She yearns for something more.

When murders begin taking place in the city where she lives, she and her girlfriend try to be more cautious, only to be caught in the middle of a dangerous situation in which an unlikely savior emerges. Can Rachel escape her destiny while two different factions hunt her?

When Rachel is taken by Zach of the rogue she is determined to resist him. But her unique Druid biology controls her and she slips perilously close to succumbing. Cole searches for the one Druid that can make his life complete. While his comrade Nathan, in a heroic maneuver to help him, suffers at the hands of their sadistic ruler, Alexander. While searching for Cole, Nathan discovers another Druid in the wrong place at the wrong time. Could she be the catalyst that brings two enemies together? Is Holly more than she seems?

Rachel and Holly escape from Alexander’s clutches only to fall into the hands of his Reapers. Can Cole and Zach save their chosen before they are claimed by another? Will the Druid women fulfill their destiny to change the race of vampire forever?

My stated policy on reviewing works by independent authors is that if it receives less than three stars, I will not post a rating and review. I guess I should clarify. That is if the author requests I review something he or she wrote. If I pick something up on my own, I will review it.

So far, the Druid series was not so good. The angels came across as intellectually challenged, sort of special needs. There was a lot of repetition. And a couple of Bobby Ewing incidents. Blech. Dallas really did leave a lasting impression, and not a particularly good one.

In addition, it almost felt like fan fiction. I got the impression that some of this was borrowed from True Blood.

Anyway, it got two stars because the sex scenes are pretty hot and I love the covers. That’s about it. And I am probably being generous because it is Christmas. Will I continue with the sequels? If they are offered free and I feel the urge for something completely different from my usual genre, sure. Otherwise, no.