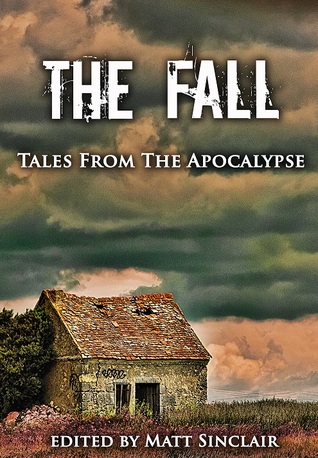 An anthology of short stories, THE FALL explores different visions of the apocalypse. Ancient prophecies, technological Armageddon, failures of government, a distracted deity, and yes, zombies, all have their moments in this collection, but so do love, yearning, hope, and humor. In the end, the apocalypse offers a path to new beginnings, even if it takes a course through death, despair, and destruction to find them.

Believe it or not, I think this is the first time I’ve read an anthology, unless you count high school and college textbooks.

First thing I have to say- Unless someone is dishonorably discharged, it is former Marine, not ex-Marine. I cringe every time I read that or hear someone say it because I know how my husband would react. I understand if someone doesn’t have a Marine Corps background, they may not know that so please pass the word.

As I suspected, the upside to an anthology is that you get a bunch of different stories in one book and it is kind of neat to be able to finish one complete story in a very short period. If you come across a bad story, you know it will only last a few pages.

The downside of an anthology is that if you find a really good story, it ends too soon and you’re probably going to get some bad ones mixed in there.

So let’s take a look at the stories.

The end of the world is upon us and the politicians have made bunkers only for themselves.

This story was great and probably my favorite. I’m glad the anthology started with this one; it gave me a positive beginning. The best part is that it has a nice twist at the end.

A zombie story. This one was a pretty good story; I would give it 4 stars on its own. It did have some interesting quotes:

Only this time a day on the couch ingesting pouches of Kool-Aid and reruns of The Simpsons won’t make me feel better.

On other days it does work? I had a little chuckle on this one, but I’m not going to try it anytime soon.

There is another quote I like; it has a nice visual and is rather eloquent in my opinion, but it could be a spoiler so I won’t include it. It is the last paragraph before the section ‘Her.’

A group of young kids are taken hostage by their P.E. coach after an apocalyptic event. This one was okay but did sound similar to Red Dawn.

Aliens (I think) feed off the life force of little girls. It was an interesting premise and I enjoyed the story, but again I can’t help but see similarities with other fiction. This one seems to be quite a lot like the Tom Cruise version of War of the Worlds in addition to another move, which I won’t include because it would be a spoiler.

One of the interesting things about Emanate is the use of Three Blind Mice. I had not remembered the possible historical significance of that and if I had, I might have read this story a little differently, although in retrospect, I’m not so sure it is entirely fitting.

This is a baseball game with an interesting ending.

I am not a fan of this story, but I want to explain why. I like the ending, but getting there was a chore. The author lost me pretty quickly. The only reason I pushed through was to get to the apocalypse part of the story. A blow by blow account of a baseball game does not float my boat.

Rebirth is about a seal who wants to become human.

Again, I was not overly impressed and again, this was very similar to another story I read that was based more on a snake, if I remember correctly. One of the details I did like about Rebirth is that it mentions Ondine, or Undine, which is a German story, one that is mentioned in Stargirl by Jerry Spinelli and captured my daughter’s favor to the point that I purchased her an old copy of a hardback. So the originality is lacking.

The Last Performance by R.S. Mellette

Live performances are pretty much a thing of the past but Henry finds one and attends a personal performance.

In an old west type of apocalyptic setting, a scientist has made a huge discovery, only to be interrupted by a weirdo religious cult.

This story was okay. It gets points for creep factor, weirdo religious factor and a twisted ending.

The Last Sacrifice by Judy Croome

That is one of my biggest pet peeves, the improper use of me and I. Others do it, but when the beginning of the very first sentence includes that mistake, it is definitely a negative for me because I am already annoyed.

Other than that, the story was okay and I liked the ending.

The following are stories by which I was simply not impressed:

Will I read anthologies in the future? Probably. Are they among my favorites? Not really.