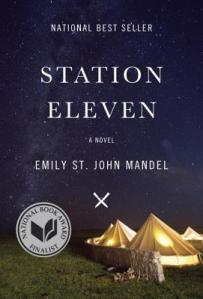 An audacious, darkly glittering novel set in the eerie days of civilization’s collapse, Station Eleven tells the spellbinding story of a Hollywood star, his would-be savior, and a nomadic group of actors roaming the scattered outposts of the Great Lakes region, risking everything for art and humanity.

One snowy night Arthur Leander, a famous actor, has a heart attack onstage during a production of King Lear. Jeevan Chaudhary, a paparazzo-turned-EMT, is in the audience and leaps to his aid. A child actress named Kirsten Raymonde watches in horror as Jeevan performs CPR, pumping Arthur’s chest as the curtain drops, but Arthur is dead. That same night, as Jeevan walks home from the theater, a terrible flu begins to spread. Hospitals are flooded and Jeevan and his brother barricade themselves inside an apartment, watching out the window as cars clog the highways, gunshots ring out, and life disintegrates around them.

Fifteen years later, Kirsten is an actress with the Traveling Symphony. Together, this small troupe moves between the settlements of an altered world, performing Shakespeare and music for scattered communities of survivors. Written on their caravan, and tattooed on Kirsten’s arm is a line from Star Trek: “Because survival is insufficient.” But when they arrive in St. Deborah by the Water, they encounter a violent prophet who digs graves for anyone who dares to leave.

Spanning decades, moving back and forth in time, and vividly depicting life before and after the pandemic, this suspenseful, elegiac novel is rife with beauty. As Arthur falls in and out of love, as Jeevan watches the newscasters say their final good-byes, and as Kirsten finds herself caught in the crosshairs of the prophet, we see the strange twists of fate that connect them all. A novel of art, memory, and ambition, Station Eleven tells a story about the relationships that sustain us, the ephemeral nature of fame, and the beauty of the world as we know it.

The more I think about this book, the better it gets. Yes, it is that kind of book. I started with four stars and eventually talked myself into five. However as one person commented in one of my book groups, it’s literature. I describe it as a less in your face The Casual Vacancy. Unlike The Casual Vacancy, Station Eleven got outstanding ratings.

I read this as a group read and I am so glad this book was selected, because I would not have picked it up otherwise. Come on, a traveling Shakespeare troupe in the Apocalypse? Nah. But seriously, it works.

Most of Station Eleven isn’t even about the Apocalypse. The Apocalypse almost comes across as a minor character. The story goes back and forth in time and between characters. In addition, the story is quite subtle. Don’t expect a lot of ups and downs, explosions, car chases, etc. It’s not that kind of book. In fact, if you are twenty pages in and don’t like it, I am comfortable saying you probably won’t like it period. The tone and style never changes; the end reads exactly like the beginning, at least in my opinion.

The moderator of the group commented that the term ‘literature’ came to mind while reading this book, and she is not the only one to say this. Mandel says it herself- “I was surprised to discover that if you write literary fiction that’s set partly in the future, you’re apparently a sci-fi writer.” What literary fiction mean? According to the all-knowing Wikipedia, “Literary fiction is a term principally used for certain fictional works that hold literary merit. In other words, they are works that offer deliberate commentary on larger social issues, political issues, or focus on the individual to explore some part of the human condition. Literary fiction is deliberately written in dialogue with existing works created with the above aims in mind. Literary fiction is focused more on themes than on plot.”

So, Station Eleven as literary fiction? Yes. Fifty Shades of Grey? Mmmm, not so much. Another test- do you have to think about it? Are there things about it you are sure you have missed? Something you suspect is there but you just can’t figure out what it is? If the answer is yes, then it is probably literary fiction. And Station Eleven is definitely one of those.

Besides the fact that I cannot stop thinking about it, and I finished it about a week ago, there are certain things that are driving me batty because I know there’s a higher significance about it or a connection between things and I just can’t figure them out. Or I could be wrong. I love books like that.

I really wish I had read Station Eleven slower because the writing is wonderful. There are many beautiful quotes I would have liked to include in my review, but I was so captivated I didn’t want to take the extra few seconds to stop and mark them. And in my opinion, this book is fabulous for us nerds. Who else would appreciate Shakespeare and Star Trek references in the same book and find nothing weird about it? This nerd!

Let’s review things that may be possible deal breakers. I mentioned a couple above but there seem to be so many for others that I will go ahead and list them here so you will have all the information I think will help you decide whether or not to read Station Eleven. Later, I will write a more comprehensive discussion section that may address some of these.

You decide. There really is so much more to this book; I have barely scratched the surface here. I will eventually come up with a list of discussion questions and maybe even a section of my analysis, which will probably include spoilers. I am currently still in the middle of discussing the book in a group and have plans to meet with a friend to further discuss, so in a little bit, I will have plenty of good stuff.

While it did not make my top ten cut, I absolutely loved Station Eleven and definitely recommend it. Highly.